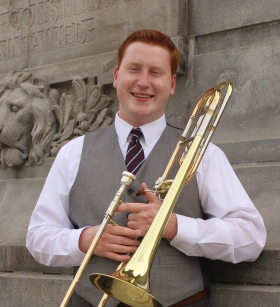 Davern received his bachelor’s degree in Music Education at Boston University in 2017, where he studied trombone with Don Lucas and conducting with David Martins. He also studied abroad at the Royal College of Music in London. Davern received his master’s degree in wind conducting at James Madison University in 2019, where he served as the graduate assistant of the university’s concert and athletic band program under the direction of Dr. Stephen Bolstad. Shawn is also a proud alumni of the Gamma Alpha Chapter of the Brotherhood of Phi Mu Alpha Sinfonia. During his time in Massachusetts, Shawn was the recipient of the 2017 Massachusetts Music Educators Association Promising Young Music Educator Award. He also served as Coordinator of Jazz Ensembles at Boston University and Manager of the Boston University Big Band. Shawn has appeared as a guest conductor with the Boston University Trombone Choir, James Madison University Trombone Choir, Jazz Ensemble, Jazz Band, Symphonic Band and Wind Symphony in concert.

Davern’s compositions and arrangements have been performed in the United States and the United Kingdom. His primary composition teacher is Eric Guinivan. Davern’s composition entitled The Natural Lands: Suite for Tuba Euphonium Quartet was the recipient of the International Tuba Euphonium Associations 2019 R. Winston Morris Award for Excellence for Tuba Euphonium Composition. In 2018, Davern’s arrangement of George Gershwin’s I Got Rhythm was performed live on NBC by the James Madison University Marching Royal Dukes for the 92nd Macy’s Thanksgiving Day Parade in New York City. He has also arranged for the Boston Brass, in collaboration with the James Madison University Marching Royal Dukes. Shawn’s arrangements of Pure Imagination and Somewhere Over the Rainbow, set for trombone and piano, were written for and performed by Toby Oft, principal trombone of the Boston Symphony Orchestra. Davern’s works for trombone choir have been performed by the Boston University Trombone Choir, Eastman Trombone Choir, Columbus State University Trombone Choir and the Ithaca College Trombone Troupe. His works for trombone choir have also been performed at the Third Coast Trombone Retreat, Boston University Tanglewood Institute and the 26th Annual Fruhling Posaunen at Ithaca College. Davern’s jazz band and jazz combo pieces have been featured by the Boston University Big Band, Jazz Combos, the Royal College of Music Big Band, the JMU Jazz Ensemble, Jazz Band and the twelve time Essentially Ellington Finalist Foxborough Jazz Ensemble. His composition And There Will Be A Story: A Sonata for Trombone and Piano was a featured selection in the final rounds of the Esther B. and Albert S. Kahn Career Entry Awards, commissioned and performed by at Bowling Green State University’s Professor of Trombone Dr. Brittany Lasch. Davern’s composition Make the Moment  is published by Warwick Music.

Follow Me on Social Media to see the Latest

Check Out Some of my Works